Sure, we've all faced challenging clients. They often put us on the spot in the middle of a creative pitch, and ask if we use "that software that makes logos," or share design comps they'd like you to consider... you know, the ones their high-school grade level nephew assembled.

Ever wonder if there was a comprehensive list of responses you could reference in cases like this? Go over to Eric Karjaluoto's ideasonideas blog — he's got just what you're looking for! Bravo.

Thx for the link Jeffrey Zeldman
Posted by Brandon Gerena at 10:39 PM No comments:

As MediaPost reports, the Nintendo Wii

has been recently hovering in the top spots of Amazon's wedding gift registry. Their observation that "Nintendo is no longer seen as an obstacle to a healthy marriage, but as a contributing factor," is very consistent with happenings in my own relationship.

My wife and I find that by participating in Nintendo Wii

2-player bowling or tennis, it brings us closer the way actual sports and activities tend to do. There's usually a hand-slapping "good job" to commend a nicely bowled strike. Or, a thorough taunting when my tennis serve is an ace (well, in all honesty, the taunting isn't always welcome).
Posted by Brandon Gerena at 7:09 PM 2 comments:

The Kaplan Thaler Group, one of my most favorite agencies in the whole wide world, just produced a memorable, creative, heart-touching and really smart new spot for the Make-A-Wish Foundation.

Related: One of my most favorite books, written by the founders of the Kaplan Thaler Group: Bang!: Getting Your Message Heard in a Noisy World 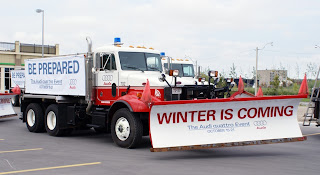 I rarely write about off-line advertising, but news of the grassroots campaign from Audi Canada caught my attention. They're placing ads on snow plows with a daunting message that warns "WINTER IS COMING."

While I'm a big fan of Audi and their efforts to be a green company, I question the environmental impact and carbon footprint from releasing these gargantuan gas-guzzling trucks onto the streets ... all in the name of advertising.

Thanks AdRants.
Posted by Brandon Gerena at 3:27 PM No comments:

The Future of Homepages

As reported on by our agency's voice of authority on User Experience, the "homepage" as we know it today may dramatically change in the near future.

The following are some interesting points from the article:

Posted by Brandon Gerena at 12:07 PM No comments:

Dumb and Dumber. That's what my wife and I are calling our two 16GB iPod Touch devices.

This weekend, we stopped by the Apple store to replace our 30GB Video iPods (stolen from us on our recent cruise). Although we entered the store with the intent of purchasing 80 GB iPod Classics, we were completely enthralled by the fun factor of the Touch model.

Unfortunately our excitement and fascination with our new (*and expensive) gadgets quickly dwindled from the moment they were connected to our computers. Jen's iPod screen lost it's magical touch capability, completely freezing up with no online forum or tutorial offering a remedy.

Simultaneously, my troubles began when I attempted to connect my iPod. The device decided it didn' t like my USB2.0 PCI slot drive on my Powerbook, and only wanted to cooperate with my USB 1.0 input (with less-than-stellar data transfer rates). Next, iTunes refused to recognize that I actually connected a compatible device and insisted I try to restart, disconnect and reconnect an array of a dozen or so configurations before finally loading it.

Lastly, my patience wore thin when a pop-up window notified me that the music and videos I was attempting to sync were TWICE AS LARGE as the device's capacity. Then began the tedious process of weeding out podcasts, playlists and albums I guess I could live without. After a few more dances with configurations so that iTunes recognized my iPod again (it just disappeared from my devices), I called it a night and shut everything down.

My usability issues aside (well not really... I hate that i have to toggle through to get to my volume, lock my device and shut it off), this may not be the device for me. Simplicity and storage capacity reign supreme for me. It's what made me such a loyal fan of my Gen 2 and 4 iPod devices.

While my wife would like to exchange her iPod Touch for one that actually functions, I think I'll eat the $39 open box fee and send this bad boy back to the store. Anyone interested in giving me a good deal on a 30GB Video iPod?
Posted by Brandon Gerena at 8:28 AM 2 comments:

Ugly strip-style and aquatic-themed surge protectors are so passe´. You've got to get those wires contained in style! Enter the MultiPot

I'm blown away by the beauty and simplicity from Northern Italy lighting designer; Rotaliana. The MultiPot looks like an attractive, illuminated planter, 5 outlets and a generous length of feeder cable. The icing on the cake? A docking tray on top so you can conveniently charge your iPod, digital camera and phone.

This gadget is definitely going to find it's way into my home office.
Posted by Brandon Gerena at 6:18 PM 1 comment: